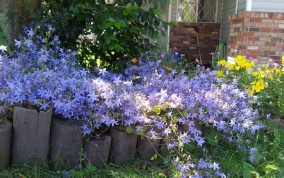 Michael Miskin is a Reichian Therapist in private pratice in North Vancouver, BC since 1985

Michael has a B.A. in Philosophy from University of Toronto, M.Sc. in Humanistic Psychology from Kensington University.

Michael Miskin Psychotherapy is located in the Lynn Valley area of North Vancouver, BC

What is Reichian Therapy?

Reichian Therapy is the systematic resolution of the individual’s physical and character armour. Armouring is the totality of one’s defenses formed in childhood in response to hurt, deprivation, etc. One might think of the armouring as a compensatory self which protects but masks and inhibits the real self (or core). The therapy process dissolves the armour allowing full and genuine self-expression.

Therapy works on many levels: past, present and future; conscious and unconscious; physical, emotional, spiritual. Nonetheless, the primary goal at the physical level is to restore full natural respiration and the capacity to experience pleasurable sensations and the joy of life. Psychologically, the goal is to be able to love fully.

The ability to work at all these levels, and especially to go deeper, makes Reichian work unique and is a result of Wilhelm Reich’s comprehensive understanding of the human psyche and body.

Reich was trained by Sigmund Freud while studying at the University of Vienna Medical School. His brilliance was recognized early by Freud, who gave him the responsibility for training analysts while still in his 20s.

Wilhelm Reich was the first therapist to advance technique beyond Freud’s "free association"; he began to talk to his patients face to face, as opposed to sitting behind them while they lay on the couch. This enabled Reich to analyse the patient’s manner, tone of voice, facial expression - what we now call "body language" – enabling the patient to contact his inner-self more fully. This often led to fuller expression of emotion while visibly relaxing the patient’s tensions. Eventually, this led to direct work on the patient’s musculature to relieve chronic tensions, which Reich called ’armour’. This was when Reich began to recognize the role of respiration in emotional expression, or conversely, how the patient’s diminished breathing was both a symptom and a cause of the armour. This is described more fully in his books, especially Character Analysis and The Function of the Orgasm.

Bodywork Therapies are all derived from Reich’s work, often with little or no acknowledgment. Wilhelm Reich discovered "muscle memory"; the capacity of chronically tense muscles to store past emotion and memories. He also discovered the role of respiration in the expression or suppression of emotion. Most importantly he discovered the role of healthy sexuality in the overall health of both body and psyche.

Wilhelm Reich was the instigator of the term "Sexual Revolution". His book by that name was first published in Vienna in 1929. (the first English edition was published in 1945)

Wilhelm Reich was a firm advocate of equality for women, and the protection of children, (see his book Children of the Future) recognizing that raising healthy children is crucial to a healthy society and that this depends on women having an equal role in society. He was also an outspoken oponent of medicalized birth, separation of infant and mother, and routine infant circumcision, while advocating extended breastfeeding, and self-regulation for children.

Reich was a dear friend of A.S.Neill, the founder of Summerhill school.

Reich’s discovery of Orgone Energy (or the "Life Energy") has the potential to be an even more important legacy than his therapy work. Although still not accepted entirely by mainstream science, corroborating evidence for the Orgone theory has accumulated persistently, since Reich’s death, in fields as diverse as medicine and astronomy.